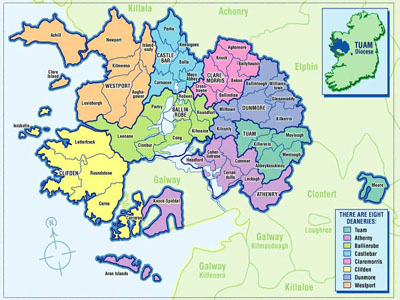 The Archdiocese of Tuam stretches from the shores of Achill Island to the low lying fields of Athenry, making it the largest diocese in the country. Geographically split north/south by the two lakes, Loughs Mask and Corrib, Tuam has pastoral charge of the largest Gaeltacht area in the country and of six of Ireland's island parishes. It also contains the major pilgrimage centres of Knock Shrine and Croagh Patrick. Established by the twelfth-century synods of Rathbreasail and Kells, it subsequently absorbed two other medieval dioceses: Annaghdown and Mayo.

read more
We use cookies to ensure that we give you the best experience on our website. If you continue to use this site we will assume that you are happy with it.Ok